What We Do >Training in sports

Special Olympics Bharat offers training and competition opportunities in 25 Olympic-style individual and team sports for persons with intellectual disabilities. We organise training and competitions at local, district, state,  national and international levels. The best performers, also referred to as the Selected Probables attend National Coaching Camps supported by the Sports Authority of India to prepare for international competitive events. Over 90% of our registered Athletes have participated in competitions at any of the aforementioned levels.

The Mission Statement of Special Olympics is to provide year-round sports training and athletic competition in a variety of Olympic-type sports for children and adults with intellectual disabilities, giving them continuing opportunities to develop physical fitness, demonstrate courage, experience joy and participate in a sharing of gifts, skills and friendship with their families, other Special Olympics athletes and the community.

Special Olympics Bharat conducts  National Coaching Camps every year. These camps are supported by the Ministry of Youth Affairs and Sports and Sports Authority of India . Each camp gives athletes and coaches the opportunity to be trained in a specific sport. The Coaching Camps enable participants to acquire sport skills matching international standards to face global competitions.

What
The Advanced Coaches Training Programme seeks to create a cadre of national level trainers and provides advance training in various sports disciplines to help coaches train athletes professionally. The programme was launched in 2008, with the support of the Sports Authority of India and International Inspiration, London Olympics 2012’s international sports legacy programme. The first two camps, sponsored by International Inspiration, trained 100 coaches.

Why
Special Olympics Bharat has a large pool of coaches and trainers. Most of them are sportspersons and some are special educators. Like the athletes, the coaches too are selected for bigger roles and greater responsibilities based on their performance and abilities. They undergo constant training to increase their level of sports knowledge and to equip them to cater to our growing number of athletes, as coaches, trainers and physical educators at local levels and in special schools. Special Olympics athletes are also trained as coaches based on their ability, knowledge and performance.

An annual  meeting is held at the Ministry under the Chairmanship of the Secretary of Sports to consider the ACTC request and the budget . Minutes of the ACTC meeting held for the year 2019-20 are:  Minutes

Catching ‘em young
We have a special focus on developing young athletes. The Young Athletes programme (YAP) introduces children with intellectual disabilities from the age of two through seven to sports and prepares them for competitions once they turn 8. The programme is solely participation based and there are no competitive events during it.

YAP has been designed to:

This is a school where all the students learn to only recognize different abilities. There is no DIS- ability. They grow, learn and play and most of all support each other. Prerana is a School for the under-privileged and children with disabilities run by the North Bengal Council for the Disabled (NBCD). Here it is not unusual to see a child with ID help a child with severe mobility restrictions. The School is located in Salugara, at the outskirt of the Siliguri Town in North Bengal, on the banks of the Mahananda River at the foothills of the Himalayas.

Ankit stood right outside his village, as the bus arrived to personally greet his guests, shaking hands with each and every one with a calm smile which never left his face throughout their visit. It is he and his family which the Ikea Iwitness team from Taiwan planned to visit and interact with.

Ankit, 7yrs, stays in a 10x10ft room with his two elder siblings and parents in the Village Karondha, Rohtak, Haryana. His mother is physically challenged, having folded legs while his father has Intellectual disabilities. While his two older siblings do not have Intellectual Challenges, Ankit manifested setbacks in his milestones, observed by his mother when he was around three years. He did not speak and later could not study. His concentration was limited. His mother got him examined by a doctor who told her, ‘he will not be able to study like other children’, although Ankit does speak now.

His parents could think of nothing to do in this situation as they belong to an extremely underprivileged background struggling to maintain a level of sustenance on a daily basis. Their food comes from the agricultural fields tilled by them for others and from charity received. His father earns through washing utensils or cleaning at functions, as he finds it difficult to do any other job which requires more comprehension. And this too happens 2-3 times in 5-6 months. Their earning could be INR600 in 5-6 months.

Ankit , in his early years had behavioural problems and often would get physical with children in his neighbourhood. To avenge his clashes, his mother, Saroj, was beaten up a few times by the neighbours. About two years back Ankit was identified by the Chetanalaya Society. He has been going regularly to the school. He has been regularly attending the Young Athletes sessions there. Saroj is happy that his son is meaningfully occupied and comes back home happy

The Chetanalaya Society  (CS) itself manifests a history of perseverance, commitment and faith. One of the first three students had his father serving the Border Security Force (BSF). He never paid much heed to his son with disabilities. However, on return from his work assignment 5-6 months later, he observed a significant change in his child. So proud was he that he made his son sit on his shoulders and walked all around the village.He asked Sunita how he could help. She asked for a table and 4-5 chairs, which she received promptly. Each time an article was required even if it costed as little as Rs 5 , they put the requirement outside on a slate for anyone to consider support. The demands were miniscule and struck a bond ,as it was easy on the pocket of the giver and very much required by CS.  Word spread and the number of students increased.

Thus built up the Chetanalaya Society which now has approx 150 students and has provided Community based rehabilitation to over 1000 children.

A training program for Special Olympics Bharat Program Managers, Coaches and the Area Directors was held from 27-29 M ay 2017 at the Little Angels School, Sonipat, and Haryana.  The program was planned to develop capacity of the States to roll out the IKEA Young Athlete Programme (YAP) in a standardized manner across India. Focus was on the deliverables of each State, implementation methods, timelines, providing guidelines for monitoring and reporting outcomes along with the curriculum and communication procedures to be followed to ensure quality outreach and measure impact. The program was attended by 74 trainees from 22 states. Full Report 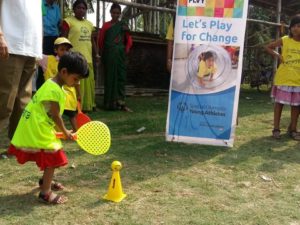 The Young Athlete Program was conducted on Saturday, 22 April 2017 in two remote locations of the Hugli district in the state of West Bengal

At Jirat the program took 33 Athletes and 12 Partners, within an age range of 4 and 9 years , through 5 stations of activity. The resource team included 5 Aanganwadi workers, 4 teachers from the local school and 6 SO Bharat Coaches from the district and the State offices at the Jirat Astha Special School which hosted the program. The event saw an approximate attendance of 120 persons including the Headmasters of two local schools. The State Chapter gifted a basic and an advanced kit to enable the activity to be conducted on a weekly basis there.

The other venue for the program was local football grounds of the Sports Association at Kanaipur , which is 57 kms from Kolkata. Out of 63 Athletes with and without Intellectual Disabilities, 22 were Unified Partners. The Local Panchayat Pradhan was the Chief Guest at the function which was also attended by the local club members amongst 90 persons in attendance. The event drew support from the local Britannica Depot and the Mother Dairy  plant who served juice , biscuit packs and curd to all the participants.

The Young Athlete kit comprising a basic and an advanced kit was presented by the State Chapter at both venues to ensure conduct of the program on a weekly basis . the Chief Guests were presented with folders containing a curriculum and an activity book each.

International Conference for Early Development of Persons With Intellectual Disabilities

Special Olympics Bharat, in partnership with the Amity University UP Noida, organized a two-day International Conference on Early Childhood Development for Children with Intellectual Disabilities on 12th & 13th September 2019 at Amity University UP, Noida campus following a pre-conference workshop held on 11 September 2019. The event witnessed an overall participation of over 350 researchers, policy makers, practitioners ,educators, parents, Coaches and students

With over 30 papers presented and over 90 CRE (Continuing Rehabilitation Education) certifications granted, the Conference provided an interdisciplinary platform for researchers, practitioners and educators to present and discuss the most recent innovations, trends, and concerns as well as practical challenges encountered and solutions adopted in the fields of Early Childhood Education. Complete Report