What we do >Building Communities >Unified Sports 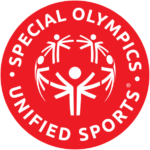 Unified Sports brings together persons with and without intellectual disabilities , to train and compete as teammates. Unified Sports helps athletes improve physical fitness, sharpen skills, challenge and compete and have fun in a variety of sports ranging from basketball to golf to figure skating.It helps strike bonding between players on and off the sports field. Unified Sports is considered a strong and effective tool for promoting Inclusion
Unified Sports helps athletes:
1. learn new sports
2. enjoy new competition experiences
3. develop higher- level skills
4. experience meaningful inclusion as each athlete is ensured of playing a valued role
on the team
5. socialise and make new friends through the Unified Sports forum of positive social interaction between teammates
6. interact with the community and gives them choices outside of the Special Olympics; Unified Sports events are often initiated by our community partners such as recreation departments, schools, Boys and Girls Clubs of America and community sports organisations.
The concept behind Unified Sports was first introduced in the United States in the mid-1980s to provide a new level of challenge for higher ability athletes and to promote equality and inclusion. Today, the initiative extends to virtually every Special Olympics sports discipline, and Unified Sports competitions have come to be an important part of the Special Olympics World Games, as well as local, state and national Games.

Playing Unified with the Media Persons 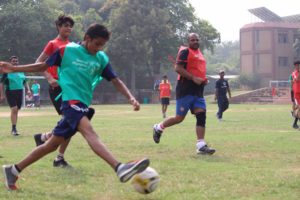 Promoting Inclusion sported a new look as the media persons crossed the threshold to play with persons with Intellectual disabilities. Most of them having covered stories of change of the Athletes, displayed a change in themselves, levelling with the SO Bharat footballers at the grounds of the Vasant Valley School, Vasant Kunj, Delhi on 4 October 2016.

passion and love for the underprivileged becomes more and more evident. It is an honour to associate with a person like this along with all his equally strongly-driven friends and colleagues. What I saw was transformation and another bold step forward towards Inclusion”

4 Teams geared up to play three matches following the knock out format. A briefing to the Unified Partners preceding the match, advised them to play while allowing full and equal participation of the Athletes. Out of 7 goals made by the winning team, 6 were scored by two Athletes. Despite the Unified teams playing for the first time, team formation was worked out well and the game took the players smoothly through one touch-two touch passing.

Journalists from Times of India, Hindustan Times, NDTV, along with free lancers were seen working games strategy along with Siddhanth Aney (from Sports Illustrated), the force behind this program and also an alumni of the Vasant Valley School.

The event has opened a new innings with the school with whom SO Bharat’s association goes back a long way. Siddhant Nath, an Athlete and a Youth leader from the school is now a colleague at the National office. The School team under the guidance and leadership of Ms. Sushmita Mitra created an ambience that induced much excitement amongst the students witnessing the matches as well as teaming up with the Athletes on the football grounds.

Along with the media persons and the school officials, staff and students, representatives of football foundations and sports–related organizations joined us watching, playing and volunteering.

Ms. Sushmita Mitra, Vasant Valley School, Delhi: As a school, we have participated in Unified events earlier but this event was unique from the perspective of the composition of the teams. Of course every one had fun and one could feel the excitement and energy on the field, but more importantly . we achieved the bigger goal of creating awareness. It is events like these which will finally take us to a truly inclusive, barrier free environment. We celebrated the strengths and skills of the athletes, not their challenges and this kind of awareness raising moves us towards our goal of respect and honour for all.

Aditya KV, PSG Football Academy India:  Sports is not just games and action on field, but an emotion. It has the ability to bring a nation together, and surely the ability to build bonds amongst everyone in the society. Being part of this unified football match has been a great experience for me. I look forward to visiting SO Bharat to discuss on ways to promote Unified Sports and strengthen the grass root program for our athletes.