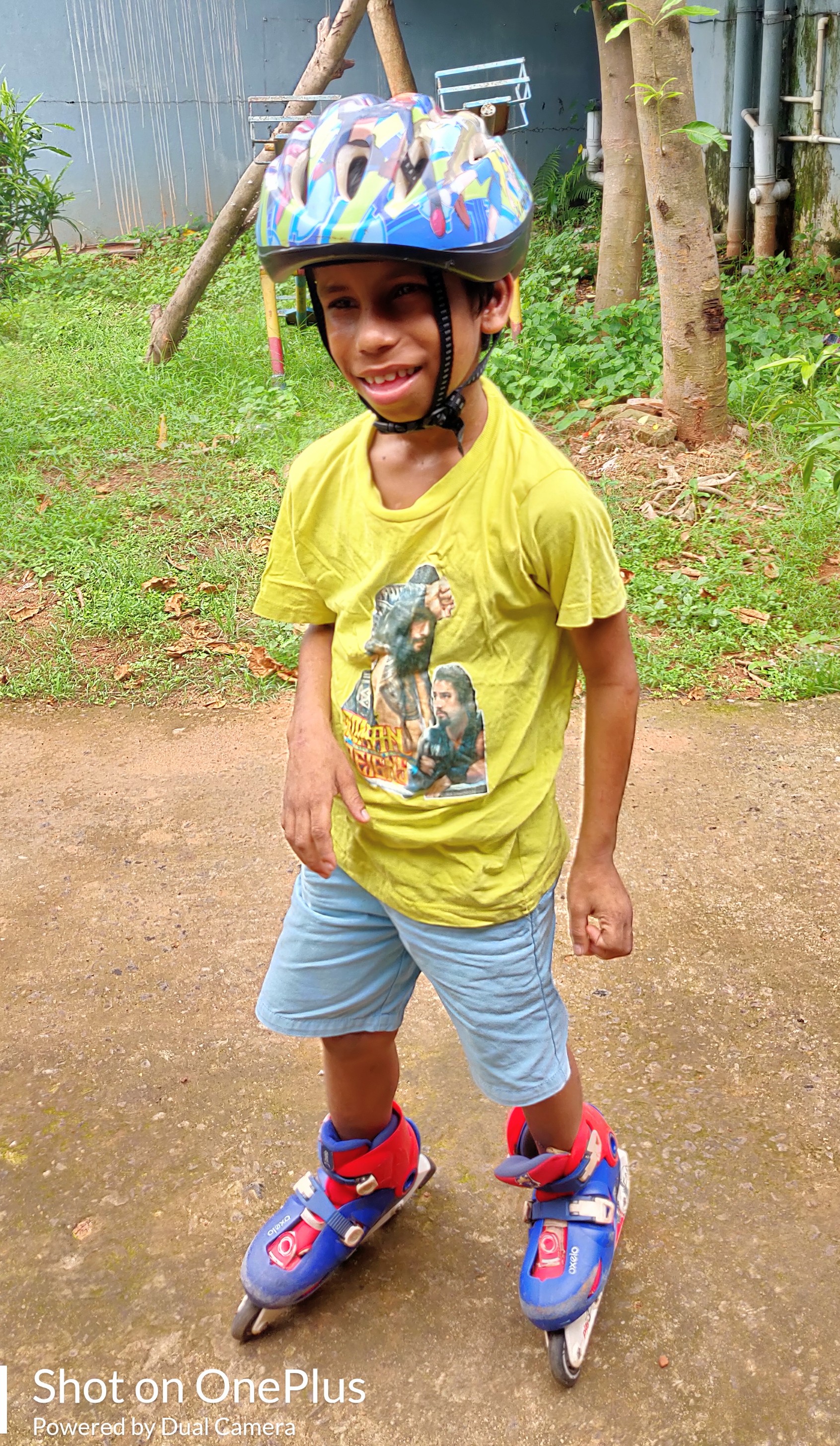 On the 20th of July 2019 the structure lit up red, drawing attention to the urgency to INCLUDE , which it stands truly for. The Bharati Rath Memorial Academy of Special Human Abilities, perched at a distance of approx. 13 km from the city Centre, Bhubaneswar, Odisha symbolizes hope and highlights ‘Special Human Abilities’ promising to grant an opportunity to anyone and everyone who reaches.

The inspiration for the facility came from Sourabh, a child of 8 years with multiple disabilities (moderate intellectual disability along with speech impairment) who maybe had nowhere to go. He and his twin brother Swagat were rescued by the Childline as their mother, mentally ill and their father untraceable, painted a grim picture of care of the children. The twins were placed under the care of a Children’s Home from where he was spotted by Arpita Mohapatra, Coach SO Bharat Odisha, while conducting a Young Athlete Program there. Sarita Routray, Asst Coach, was assigned the task to train Saurabh in roller skating. The development observed in Sourabh sowed seeds of exploring a potential in, perhaps, many children possibly unaware of their dormant abilities.

With his long involvement of about 30 yrs in a related field, Mr Prakash Rath , Area Director, SO Bharat – Odisha, stood witness to the rampant discrimination against the PwDs. A decade long struggle with the Sports Department of the Odisha State Government bore very poor result in terms of improving the standards of sports for PwDs and treating them as equals as mandated in the Constitution of India. However, it failed to diminish his resolve. Mr Prakash went on and shared the idea with like- minded people and the concept took shape in 2017. Being associated with Blind Cricket and Paralympic sports and while already conducting sports for persons with Disabilities through Special Olympics gained him access to persons working in the field. They all supported the idea

This concept also opened a door for him to dedicate the endeavor to the memory of his beloved sister-in-law, Late Bharati Rath, who had influenced and shaped his life by taking care of him during the struggles of his childhood and youth. While the passion and the concept burnt inside, actually bringing it to fruition happened only after receiving the magnanimous support of Mr. Pradipta Kumar Rath, his eldest brother who not only donated the land but also constructed the whole infrastructure and handed it over to the Academy. The Academy building was inaugurated on 6th October 2018 and started providing services from 27th February 2017 by conducting coaching classes in various places like Trident Galaxy Complex for Swimming, OLS premises for football, floorball, floor hockey, roller skating and table tennis.

The Academy offers sports coaching in Football, Cricket, Swimming, Floorball, Floor Hockey, Badminton, Roller Skating, Bocce and Table Tennis with a Coach assigned to each of the disciplines. While the focus is on providing facilities and services mainly to Persons with dis-Abilities it is also open for those without dis-Abilities and from underprivileged sections of the society. The Academy can be accessed by persons from the cities of Bhubaneswar and Cuttack as public transportation is easily available. There are no fixed practicing hours. It is fixed depending on the convenience of the athletes. Currently there are 50 Athlete with dis-Abilities and 1 without dis-Ability registered.

The services of the Academy extends beyond its physical boundaries.  The Academy identified a promising 16 year old boxer from the slums of Puri Municipality , two years back. She was 14 at the time. The Academy sends her to Hyderabad for advanced training for participation in various competitions including state and national levels. The Academy bears all her costs there. It also monitors the progress through various means on a regular basis.

“I can foresee the Academy becoming a leading institution in sports for Persons with dis-Abilities, especially in Odisha providing international standard facilities and services to its beneficiaries, and producing scores of world class athletes year after year, in about 10 years’ time from now. We are a great team and are moving furiously in that direction” – Mr Prakash Rath – SO Bharat Odisha