What we do >Stories of change >Floorballer from Assam 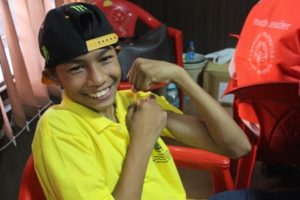 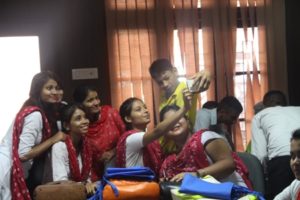 Rohan, 16 yrs , joined SO Bharat 5 years back. He was the reason for his father to shift base to Assam. With an IQ of 55 along with speech impairment  which could be attributed to a forcep delivery and, the tragic passing away of his mother 3 months later, left his father isolated in his struggle to give Rohan quality life.

Through his growth it started to became clear that he needed specialized care. Very often his behaviour of running away, of being temperamental and even aggressive at times  became unmanageable by his family members. Getting bullied by people around overwhelmed his father, who decided to bring him to the care of Ashadeep Centre of Mental Health and Special Olympics Bharat. Rohan is also cheerful, friendly and loves to help people too. His father was determined to strengthen these aspects of his character.

Rohan joined SO Bharat and took to Football, Badminton and Roller Skating . Pinku Kalita, his Coach, started to mentor him making him listen to his instructions and do simpler sporting drills. Rohan won a Gold medal in a  Badminton competition at the National Championship held in Mumbai from 19th – 24th Jul, 2014 in Doubles and a third position in Singles. Rohan showed excellence in Roller Skating along with a good performance in Floorball. Participating in sports gave him a focus and occupied him, gradually improving his behaviour.

Assessing his skills in Floorball , Pinku is sure that with extra practise sessions he will give a tough fight to the competing teams at the Special Olympics World Winter Games 2017. “His attacking position is very good ; I am working on strengthening that. 5 hours of practise in a week will prepare him adequately.”  Says, Pinku. Pinku is also very confident that Rohan will follow his instructions completely.  Rohan participated in the preparatory Camp for Floorball held recently in Hyderabad.

The struggle for his father remains constant, shuffling between the small Body Art Studio that he runs and situations arising at home due to limited finances. Says his father,“We have still to work on his behaviour.If he continues with Sports ,101% he will improve . This is my belief. I trust SO Bharat. When we went to Hyderabad for the Camp, the ambience was so congenial,easy for him to blend. It was a great experience. I knew that this is the place for persons like my Rohan”