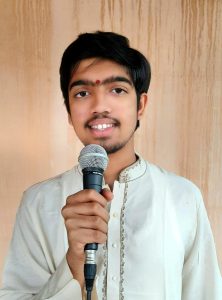 A Rainbow of flairs from Karnataka

Amogh Kashyap, 17 yr old, belonging to Mysuru, Karnataka is a Person with multiple abilities. He is a pianist having finished 4 grades of western classical piano from the Trinity college of London( View Here ; he had a brief stint with Drums; he is very interested in trekking having done 2 difficult levels at the Himalayan trekking- Har ki dun and Sarpass. He loves outdoor travelling and enjoys doing jungles safaris. He has also participated twice in open water swimming near Mysuru.

In 2020 we heard him and saw him in quite a few virtual events, Saturday Melodies, to name one

His mother recalls how he hugged the television when he saw a smiling baby in a ‘Baby Johnson’ advert; in his grandfather’s lap he learnt to recite the shlokas (religious chants) and was independently doing so by the age of a year and a half.

Although born in Boston, USA, Amogh has spent a large part of his early childhood in India. Till he was 6-7 months old he appeared a happy child. It is only after he turned 6 months that his mother observed delayed milestones. He received Physio and Occupational therapies and was registered in a playschool as well. But at school Amogh never responded to his name and never answered or spoke there. As he is the only child, his group behaviour never unfolded at home. There was something amiss, but something which could not be pointed out

His parents took him to the Spastic Society, Bangalore for an assessment. The dean conducted a clear assessment which indicated a challenge in language development and Social Impairment placing him in the Autism Spectrum. It took his parents a couple of months to get over the shock as well as the subsequent denial.

His diagnosis marked a long journey of interventions, therapies and academic challenges and rejections, both for Amogh and for his parents, although there were interim periods of relief. After joining a Montessari School in Mysuru, Amogh found joy in doing things alone, be it the jungle gym, the Slides or any other activity as long as he was left within his own private space. Inclined towards music, he pursued Classical training in Karnataka music as early as Grade 1 and was placed under professional tutelage by the time he turned eight.

As he progressed to higher grades his learning inability became more and more apparent. Class 10 posed a severe challenge where he underperformed despite repeatedly attempting to comprehend concepts which eluded him and listen to storylines that never stayed in his mind. Relying on rote learning did not help. According to his mother, Ms Keerthana Kashyap, he started to show signs of anxiety and discomfort.

“It’s a delight for me to share the story of my son, Amogh. Speaking about the trivialities of an unexpected, arduous and enlightening journey. It took us few years to realize that there would be extraordinary challenges and we must brace to confront and overcome them”

Since a very early age, Amogh’s parents observed that water made him very happy. He was encouraged to participated in Aquatic activities in all his schools. The recreational rides in water made him jump with joy. His mother often called him a ‘Water Baby’. Mr Sundaresan, associated with SO Bharat since 2004, has mentored Amogh having witnessed extraordinary sincere and prompt compliance and an a remarkably socially pleasant demeanor. Sundaresh , who is the Indian ambassador for the Michael Phelps Foundation has been training Amogh since 2016. “ He remembers each and everyone’s name. The day he doesn’t come for a session, everyone asks for him. That is what Amogh is. Butterfly stroke, flip turns and Diving would soon become his forte , once he re-starts his practice routine. While being sincere in his practices he is always ready to help my other students”- Sundaresh

Its indeed a proud accomplishment for him to have completed 10th under CBSE with 65% without any exemptions.  He was given just an extra hour with an adult prompter to keep him motivated during the exam. He is currently in his 12th under NIOS.

It may be relevant to mention a shloka often recited by Amogh:”Salutations & Salutations to the sandals of my Guru, Which is the Ocean of Knowledge

Says his mother, “This recital is very close to my heart. We truly believe Amogh has been very lucky. He is been blessed with humble and fine gurus who absolutely adore and love him. They have taught him so well without which, he couldn’t have come this long. We have the highest gratitude for all his teachers”