What We Do >Building leadership The Special Olympics Leadership Academy provides perspectives and tools that help Special Olympics leaders to enhance their personal and organizational performance. The Inaugural Academy was held in December 2014 in India expanding to other countries namely, South Africa, Egypt, Canada and returning to India in May 2016 for the second module. The Leader III workshop builds on the content of the previous two , exploring the topic of organizational sustainability and solidifying the foundations of the participants’ leadership development via an experiential workshop format

Two Special Olympics Asia Pacific Leadership Academy Workshops will be held between 17&23 January 2018 in Kolkata West Bengal. While 17- 19 January 2018 will hold Leader I bringing on a fresh batch of participants, Leader III will be held from 21 – 23 January 2018 for participants who have qualified the previous two levels. The event is supported by the Lions Clubs International and the Aruna Abhey Oswal Trust carrying forward their historical commitment to create an expanded inclusive development platform across India to benefit children and adults with intellectual disabilities, their families and their communities

About the Leadership Academy Special Olympics has provided training in athlete leadership since 1986 with the Athlete for Outreach Course which is now called Sargent Shriver Global Messenger Program. The program was expanded in 2002 to include additional courses beyond that of the Sargent Shriver Global Messenger Program. Athletes involved in the program have gone from hardly being able to speak, from being bullied and excluded to representing Special Olympics on the world stage in a variety of settings even presenting on TV and addressing governments and the UN. They now have a variety of educational opportunities that include communication, sports and governance leadership topics and Athlete Congress

he purpose of Athlete Leadership is empowering Athletes to develop leadership skills and utilise their abilities to undertake leadership roles, influence change in the Special Olympics movement and create inclusive communities around the world. Through organised training and practical experiences, the program prepares athletes to undertake meaningful positions of influence and leadership throughout the Special Olympics organisation, both on and off the playing field

Areas Of Training the Athlete: 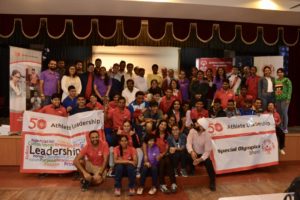 The Athlete Leadership University opened in New Delhi with its first workshop held from 20-24 November 2017at the Frank Anthony Public School. 29 Athlete leaders and 24 mentors from 19 states participated in the program which was led by facilitators from SO Asia Pacific and SO Bharat. The three day workshop took the participants through the curriculum that included relevant activities followed by free interactions with the resource team